Married in Mink (and other furs) 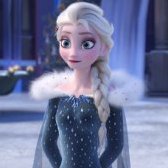 By LordTheNightKnight
November 20, 2016 in Fur Den